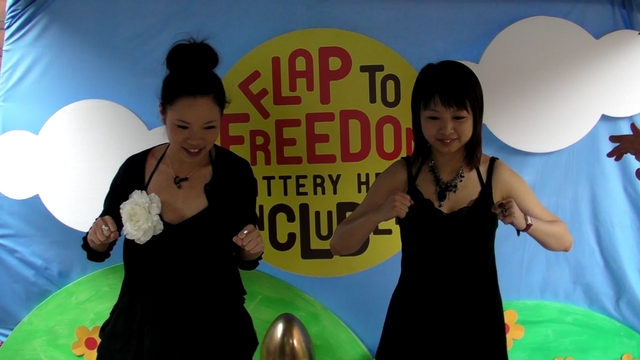 Our concept
Two players take their positions behind the chicken of their choice. Take the special arm flapping pose and the music begins. The race starts, you flap your arms and your chicken does the same, walking down the runway to the freedom beyond the chain fence. The first person to get their battery hen to freedom is the winner. If you tire too quickly, so will your chicken. Races were timed for the pecking order leader board, with prizes for each race and an ultimate winner.

Technical details
Existing consumer toy chickens were hacked, removing all circuits before a custom circuit was designed that gave us control of legs, wings and beak. Arduino microcontrollers were used along with radio frequency modules to give wireless control of the chickens.

A hidden camera analysed movements of the two players, and directly controlled the chickens. Software programmed using openFrameworks and OpenCV.