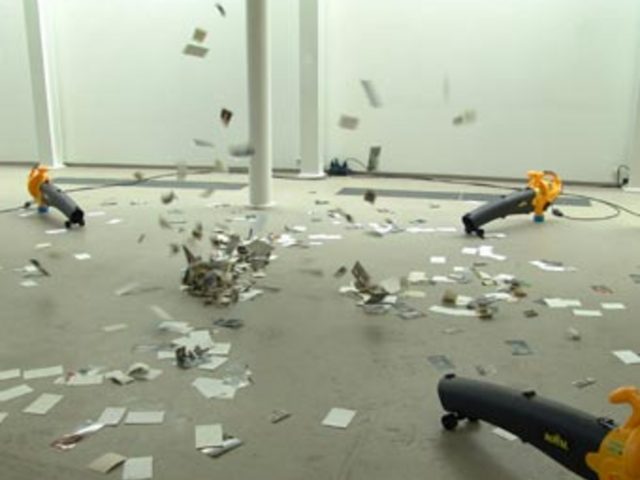 video installation, 2000
1 projection (3‘, Loop), 1 wooden bed,
1 alarm, 1 lamp, 2 channels audio
Miss Marple cannot sleep – her alarm is torturing her. At first, she doesn‘t even hear it. Later, every time she gets up to look at it, it stops. When she lays down, it starts again. She gets more and more hysterical and eventually, mechanical.

Woman on the ground

In an urban public space a passer-by is confronted with a video sculpture that looks like a woman creeping into a paper box. She reemerges, her body covered in brown fur while her face appears in a hole in the front of the box. Behind the screen she is looking peacefully into her inner self, singing and humming an old lovesong in Low-German.

The edge of the city

experimental documentary, 30’39’’, 16:9, stereo, PAL, color, 2007
language: spanisch/english, english subtitles
The edge of the city traces the search for the borders of Mexico City and the people that live there. Urbanistic interest and touristic couriosity merge in a videographical collage with the changing rythms of travelling: a “poetical odyssey to the human core in the megalopolis, a journey through urban (ir)realities in one of the biggest cities of the world.”

video projection, 3‘39‘‘ (loop), 2007
In Horsedog a white horse appears above a white dog as if standing on top of it . Sometimes the dog is on the lookout – but nothing happens.
After a minute a black horse appears behind the white horse – and and dissapears before reaching the borders of the image. The dog doesn‘t notice it.

sculpture with 3 one-way-mirrors and 600 lights, 2007
Endless Lights is a model for the nocturnal sea of lights of a megalopolis. In a triangel of one-way-mirrors lights are reflected in a seemingly endless cityscape.

installation, 2007
Mixed media, a dog of porcelain, custom software, 3-channel-audio; 210 x 160 x 380 cm
The city‘s edge at night. A carcase‘s facade is projected onto a wooden hut that seems to be inhabited: inside, a light is turned on and off sometimes. But also a window with the singing silhouette of a person behind it, is projected onto it. Behind the hut a man appears and dissapears. On the other side of the construction site scenery, once in a while a dog is barking and enlighted according to the volume of his singing.

SD Video, Pal, coulor, stereo, 1’58”, 2008
A nocturnal view out of a window with moving curtains shows a thunderstorm outside and flashes that illuminate the inner space. In between the flickering image, sometimes a human silhouette seems to appear.
The end of the world 13 is based on a video performance and the selection of interference imagery produced by artificial flashes inside and lightnings outside.

installation, objects, 2008
o.T. (Ships) refers to historical and and contemporary shipping in changing light and sound scenarios. Real dangers and stereotyped images of historical sailing, a boat with refugees and a containership are audiovisual sculptures with an imaginary communication.

installation, 2008
2 blowing machines, lightcontroler, plastic palms, plastic objects, canals for air, ventilator, bags, lights, motion detector, 2008
An installation in a greenhouse about the genuine purpose of a greenhouse: accelerated agriculture as an industry. Everything keeps moving, vegetables look good for the moment – before collapsing.

The Greatest Show on Earth 2

HDV-video, 20‘ (Loop), 2008
Language: Lowgerman / english; subtitles
Altar bread in a toolboxa mess in a bath robe – ambivalent imagery comes together in the everyday life of two nuns that live and work in a circus. Sister Bernard (62) and sister Dorothy (59) have been accompagnied with their weekly rituals, with hitching the trailer and traveling in the US.
With their concept of a „ministry of presence“ they try to enable spiritual life in a circus as a mega-event: reflection and show meet.