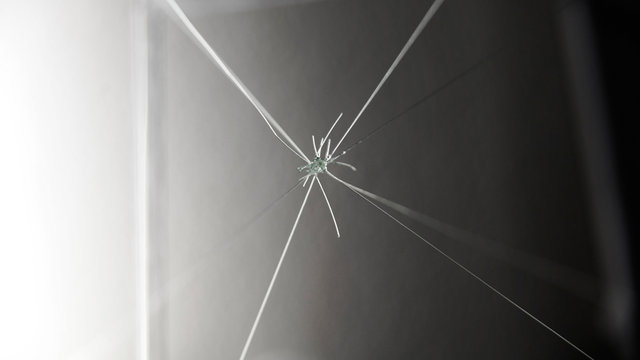 Eight nylon – cords link to a mutual point that can only hold the position in space because of their interdependent movement. A loop occurs – a movement is simulated in a digitally reconstructed physical space and the resulting information of the position is transformed back to the physical space. The Outcome is form of spatial image, a kinetic plane which expands in three dimensions. As a Consequence the perception is changing, the moving image cannot only be seen from one fixed viewing angle or rather one unique viewer position. The observer is autonomous, moving around the sculpture and is thus controlling his/her own point of view of the spatial film. Consequently restrictions of the medium are scrutinised similar to that what the expanded cinema movement questioned. With that in mind the work follows the idea of the work “Spatial Soundsculpture”, but in contrast to the older work the Screen has completely vanished. The Interface that lead to the digital medium in form of a window is only visible by the edges of the mapped coordinate system.