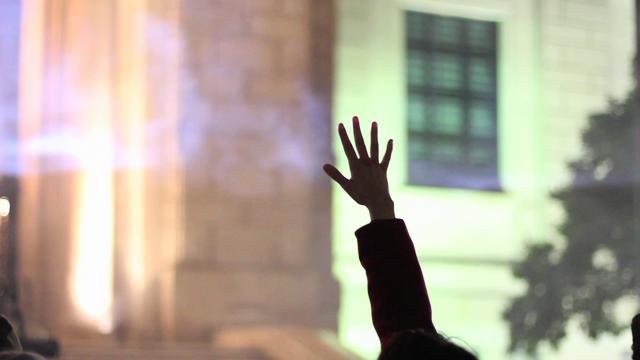 The ephemeral clouds acted as smoke signals, each cloud carrying a unique message and story. Memory Cloud Detroit was a platform that offered the people of Detroit an opportunity to engage in a dialogue about the city. This interactive space animated the DIA Woodward entrance with stories collected from the public. During the two weeks leading up to the event, messages consisting of memories, stories and personal aspirations for the city of Detroit were collected and archived on-line at Voice Of Detroit. Each individual expression became a part of a continuous story about the city, a narrative written by participants over the duration of the project transforming the steps of the DIA into a dynamic space for communication. Audience members were also able to contribute messages via text-message during the performance each night. These collected text messages will be added to the Voice of Detroit archive, becoming part of an evolving diary and a voice that will speak of Detroit’s past, Detroit’s present and Detroit’s future. An archive of collected stories and documentation of three day performance will go live at Voice Of Detroit in the coming weeks.