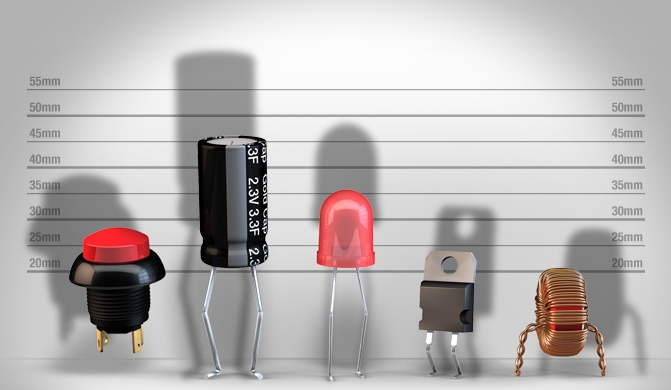 Get to know your tools

The video explains how to build a basic circuit with the Arduino board, and how to use each of the basic components such as LEDs, switches, and resistors. So if you are new to engineering, or have only recently purchased the Arduino started kit, this video is a must-watch!

Within the demonstration, Banzi creates a circuit that shows how easy it is to connect LEDs and buttons to the Arduino board. Banzi even shows us how the Arduino software can interact with the various other components. Specifically, he sets the conditions and variables within the Arduino code that can manipulate the LEDs when certain criteria are met.

Well, Massimo Banzi shows us how to create the inexplicably named “Love-O-Meter”. Quite simply, the system acts as a thermometer, and it is capable of measuring how hot (or not) you are. Banzi also uses several clever pieces of kit, including a temperature sensor that emits a voltage proportionate to every degree of centigrade it detects.

Using photoresistors to judge the distance of your hand as you move closer or further away from the sensor, you’ll learn how to make a musical light theremin. Once you’ve built the circuit the next step is to calibrate your new system and configure the program. As Massimo confesses, you might find this tutorial project funny but after a while this new sound can be annoying!

In this tutorial video, Massimo Banzi explores the possibility of making musical sounds with the Arduino Starter Kit. To do this, Banzi has created simple circuit on the Arduino board, which is then completed with four buttons and a mini piezo speaker. But to make the device resemble a mini keyboard, Banzi has programmed each button to play a different note. Banzi then uses the Arduino software define different frequencies for each note within the code. But don’t worry if this sounds rather complicated, as he goes through the code line-by-line to show us exactly how to make a mini-keyboard. So to start making music, make sure that you watch the latest video.

It’s time for another instructional video from Massimo Banzi, and this time he’s showing us how to make a motorized pinwheel with Arduino. To do this, Banzi will be controlling a DC motor using the Arduino board so that he can spin the wheel at different speeds. However, creating a motorized pinwheel has its own set of unique challenges. For instance, a DC motor works at a higher voltage than the Arduino. This means that it requires more current that an Arduino pin can provide. This is, of course, a difficult problem to overcome, as too much current will burn and destroy the Arduino pin.

Many of us fondly remember having a crystal ball (Magic 8 Ball) in our younger days, but now Massimo Banzi is showing us how to build one from the materials in The Arduino Starter Kit.  The electronic version of the Magic 8 Ball is completed with an LCD screen and a tilt sensor, which will provide the user with a randomly generated answer after the circuit is shaken. If you would like to know how this is done, Banzi also looks at the code to show us how everything works.

Back with a brand-new Arduino starter kit project, Massimo Banzi walks us through the process of making a touch sensor lamp. Banzi also introduces us to the concept of external libraries for the Arduino. This is an extremely useful tool that should help streamline the development process for beginners and experts alike. Put simply, an external library can be downloaded and installed into the Arduino development environment. They are essentially a database of pre-written code that can be used in your device to programme certain behaviours. In this case, the external library enables Banzi to create his touch sensor lamp quickly and efficiently.

Good news… it’s time for another Arduino instructional video with Massimo Banzi! And this time, our favourite Italian hardware hacker will be using the Arduino to control software running on your computer. To do this, Banzi will be hooking the Arduino board up to a computer via a USB connection, and then use a specific programme to change the colour of the Arduino logo. By the end of the video demonstration, you should be able to send a value from Arduino to your computer, and then use a program to interpret this software as a colour. Finally, you will be able to change the colour of the Arduino logo easily using a simple dial.