The Light Machine of Conrad Shawcross 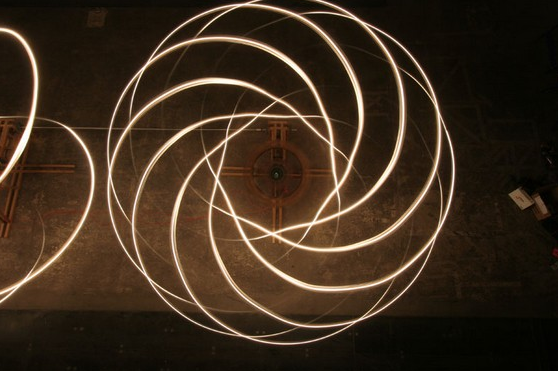 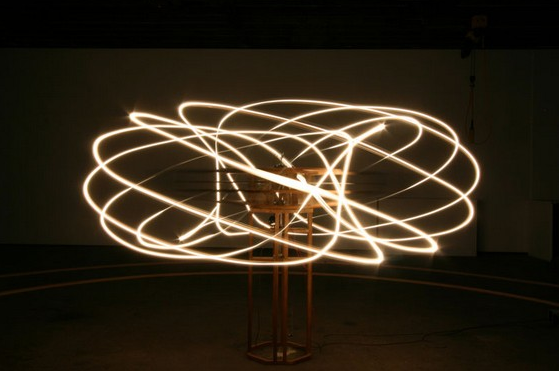 Why are you an artist and not an inventor or an engineer?

I would be a terrible inventor. My machines don’t do anything, although they do have the guise of being quite functional. And while they look rational and constructed and as if they have some kind of practical purpose, they don’t actually. They are often quite metaphysical. They don’t have any practical application in terms of the norms of society. I’m approaching and am interested in systems from an artistic point of view, so I have come up with this way of working through artistic, philosophical and conceptual interests, rather than trying to find a machine that makes something or makes money. It is more a philosophical angle.

I really like them as unfinished objects. The minute they turn, you are left in a much easier position of ‘ok, that’s about a spinning light bulb’. But before they operate, you have to be more aggressively thoughtful to try and work out what they are for. 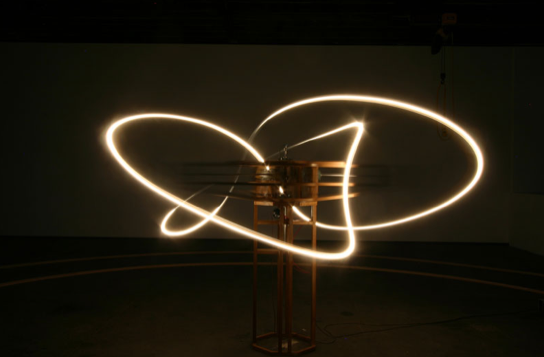 Do you see your works as educational?

Yes, definitely. There is a huge amount of information that I want to get across. They are very much about philosophy and epistemology. I like the strength of conversation that comes from them and that’s the sort of work I go for. I like the possibilities of what they could mean to people. The less breadth that something has, then the less conceptual it is. It’s about the potential for ideas, and not necessarily my ideas but the ideas that the viewer has.

No. I think with my pieces, visually there is a lot going on and they have quite a high aesthetic impact. Whoever comes into the room can’t help but have those kinds of immediate experiences with the work. 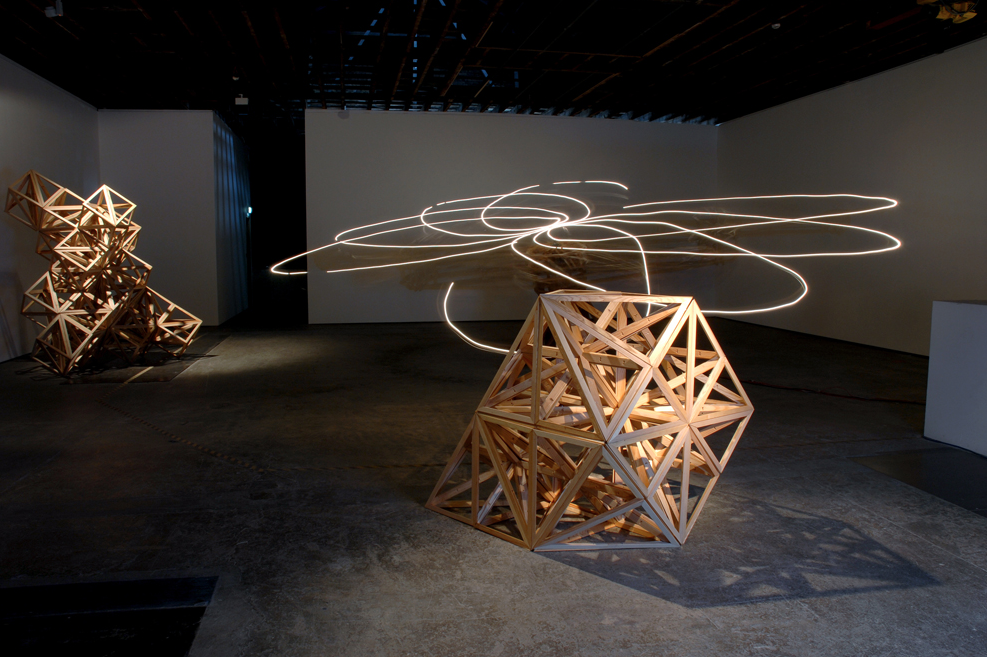 Harmonic Tower is a version of a machine that already exists.What interested you about recreating it?

The scale is important and by making things much bigger, it’s very different to you as a person. It’s not just about making big things but I think it will produce decent sized pictures. The pictures compared to the tower will be pretty small. They will only be one metre by however long but they aren’t massive. This size tower was what was needed to make those size pictures. I’ve added a new time dimension to it, which is quite experimental. It should produce some things that haven’t been done before. I don’t think it will be repetitive.

But it is also about curating a show. I wanted to make everything in the show cohesive. It is about acoustics, cosmology, epistemology and all the maths behind the music, and how this links in with modern theories about the universe, like string theory. There is a sincere investigation in what I am doing and quite a renaissance sort of approach. For example, I’m meeting a mathematician on Sunday who is a cosmologist from Oxford. He’s going to talk to me about tying knots: knots are an area of String Theory to do with dimensions of space. These are things that I am doing earnestly. I hope that it is playful and human folly is in there too. 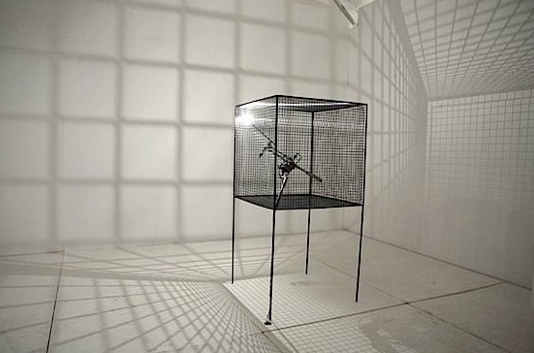 Can you investigate these things in an art context freely, more freely than in a science context?

Yes, definitely. It’s indulgent for me to say I am a scientist working on my own. Science is about communities working things out and sharing information. I’m just doing what I like; I am the worst scientist in that sense. However, I’m fascinated by ideas of certainty and where science is in terms of string theory and the shape of the universe. It’s just speculation but it’s under this umbrella of an absolute rational empirical house which is building up on itself. It’s growing but it’s actually unstable underneath, like these big towers and buildings that are built on stilts. It’s precarious.

The rival metaphor to the epistemological building is Otto Neurath’s boat. He believed that there was no certainty. He believed we are in flux. We’re all at sea in a boat and there is nowhere to land. In order to float, all repairs have to be done at sea. The structure owes its strength and its floatation to its interlocking parts and that’s your argument. You can’t land anywhere and there is no reassurance. I kind of prefer that in a way. It’s much more extreme. But it’s not a scientific approach where you establish certain facts and you build upon them and you work things out. I think it’s more philosophical.

Is what links art and science – a sense of uncertainty?

I don’t think science is uncertain of itself. It believes it will discover the undisputed truth of everything. And it kind of boasts that it’s on the brink of discovering the grand theory of everything, which is very arrogant. It is very, very certain of itself . For example, the Greeks discovered the atom 2000 years ago. And the atom by its very definition is the most indivisible unit. Two millennia later, scientists discover the nucleus within it. This then becomes the new definition of the essence of matter. We are now on quarks and even smaller particles and this is now the new definition of the essence of matter.

If you look at the history of it, the onion you are unpeeling, it seems foolhardy to say that we have definitely found it now. Ten years on, they will probably find another microcosm within that one. There is an arrogance to it that is slightly precarious. It is unstable.

Do you create in order to make sense of already formed ideas or do your ideas spring from creating?

They are already formed mostly. With the five machines [Loop System Quintet], I just had to think like a factory and build them. They do inform other ideas and they have led on to other pieces. There is quite a rational approach to the building of the machines, as I know what I want to do beforehand so there isn’t much margin for error.

What is the motivation behind the pieces in the exhibition?

To get them working. They are prototypes. I didn’t have the piece in Greenwich [at the National Maritime Museum] working until I was in the museum. It was a huge piece of engineering. I like to fly close to the wind, which is not reassuring for you! [laughs] 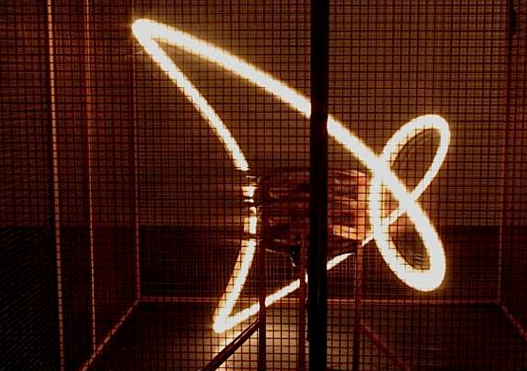 Where do you see yourself progressing as an artist?

Hopefully getting more proficient in what I do. For example, with these five machines, if it were a year ago it would have been an impossible, mammoth task to build them. Using templates and parts means you can create very complex kind of systems that seem like they take a huge amount of time. These machines actually took me six weeks to make, working every day with my assistant. That’s what’s very exciting, to increase my potential through knowledge and expertise.

Sculpture: is it fun or hard work?

It is both. I wouldn’t have it any other way, as I’d be twiddling my thumbs. It can be pretty tough and hard work in a manual sense but otherwise it is great. I’m just running around ordering all these crazy machines, getting these things made. It is good fun. 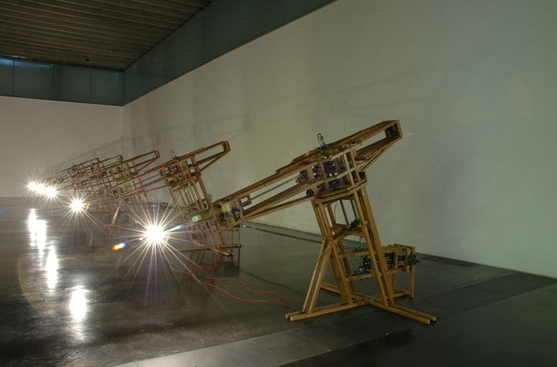